"Taking the scare out of scarcity: Why ‘perfect storm’ narratives serve to keep the poor poor"

Scarcity is a dangerous idea and has long been a totalising discourse in resource politics and mainstream economics. A large body of work has critiqued the naturalisation of scarcity in discourses of environmental change, and has highlighted problems in how scarcity is conceptualised and the ways in which scarcities are socially and politically generated. Despite this, the ‘scarcity postulate’ – that human wants are unlimited and the means to achieve them, scarce and limited – underpins much modern economics. Scarcity is widely used as an explanation for social organisation, social conflict and the resource crunch confronting humanity's survival on the planet. Scarcity is made out to be an all-pervasive fact of our lives – be it of housing, food, water and oil or in the drive for nuclear power. From the ‘Limits to Growth’ debates that influenced environmental movements in the 1970s, discussions concerning the causes and consequences of the overlapping food, fuel and finance crises of the 2000s to debates concerning climate change, environmental security and militarisation in the Anthropocene, the discursive constellation of scarcity seems always at work.

The talk traces the intellectual history of scarcity and looks at scarcity debates across water, energy and other resources and their implications for institutional arrangements, policy responses and actual outcomes for poor people. It examines how scarcity has emerged as an all pervasive discourse in scientific and policy circles. It shows how the 'scare' of scarcity has led to scarcity emerging as a political strategy for powerful groups that ignore the interests and needs of poor and marginalised people. Aggregate numbers and physical quantities are trusted, while local knowledges and experiences of scarcity that identify problems more accurately and specifically are ignored. Science and technology are expected to provide 'solutions', but such expectations embody a multitude of unexamined assumptions about the nature of the 'problem', about the technologies and about the institutional arrangements put forward as a 'fix.' It is thus important to take away the scare out of scarcity. This is because scarcity is not a natural condition: the problem lies in how we see scarcity and the ways in which it is socially generated. The presentation concludes with the new politics of scarcity, new framings, contestations and entanglements of scarcity that are associated with new configurations of actors, new political economic relations and new spatialities and geographies of resource control and violence. It concludes by looking at alternative framings and vernacular conceptions of sustainability.

Professor Lyla Mehta is a Professorial Fellow at the Institute of Development Studies at the University of Sussex, UK and a Visiting Professor at Noragric, Norwegian University of Life Sciences. She trained as a sociologist (University of Vienna) and has a Ph.d. in Development Studies (University of Sussex). Her work uses the case of water and sanitation to explore conceptual and empirical questions concerning scarcity, power, politics, rights and access to resources in urban, rural and peri urban areas. She has extensive field experience in South Asia and southern Africa. Her publications include The Politics and Poetics of Water: Naturalising Scarcity in Western India and The Limits to Scarcity: Contesting the Politics of Allocation and water for Food Security Nutrition and Social Justice. 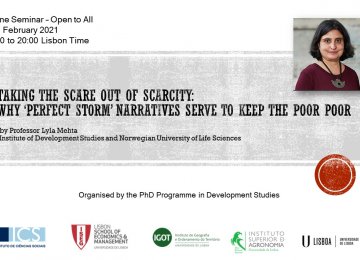 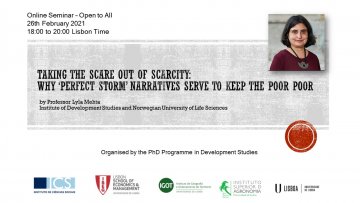